Chorizo-Corn Empanadas are savory hand pies made with a masa harina flour blend and filled with cheese, spicy ground chorizo and sweet corn.

The melty Monterrey Jack cheese pull makes these flavorful empanadas fun to eat. You get the earthy spice of the chorizo, the sweet burst of fresh corn and creamy cheese all packed into a fluffy corn crust. These festive hand held pies are the perfect size for dipping into a creamy cilantro lime sauce.

Let’s talk about chorizo. There are many different kinds of chorizo. This recipe calls for chorizo that has the appearance of the ground beef you would find in the meat department of your grocery store. It’s flavored with a variety of Mexican spices like chilies, oregano, cumin and garlic. My favorite is made by a local company called Hempler’s and can be found at most local grocery stores.

Before I knew much about chorizo, I tried using the kind that comes in a tube. It’s what I thought chorizo was, boy was I wrong. It’s very different from the fresh ground chorizo. After placing the tube contents in my sauté pan, there was not much substance left at all, just a lot of grease. This kind of chorizo will not work in this recipe.

These savory empanadas taste delicious when dipped in Cilantro Lime Crema. It’s an easy 3 ingredient sauce that pairs perfectly with the spicy chorizo filling. Mexican crema can be found in most grocery stores and is a little sweeter than sour cream. If you can’t find Mexican crema, just use sour cream. 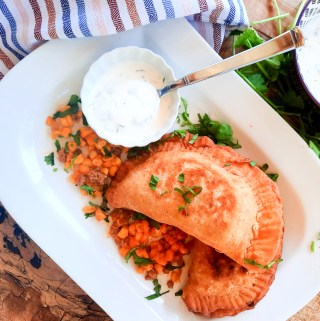