Grilled Potato Salad with Shallot Vinaigrette is a flavorful addition to your table with fresh herbs, bacon, chopped egg and pickled peppers.

Sliced Yukon Gold potatoes are grilled before soaking up a light, somewhat creamy shallot vinaigrette. Nestled in amongst the potato slices are bits of Mama Lil’s Peppers, smoky bacon, hard boiled egg, garlic scapes and chopped dill. The combination of vibrant flavors and textures make this a favorite side dish.

If you have never grilled potatoes, the first step is to par boil them. The goal is to boil them until a fork can pierce through the outside, but there is still resistance on the inside. You want them to be firm enough to slice and stay in a firm round for grilling. Once par boiled, they can be sliced in about 1/4 inch rounds, tossed in olive oil, salt and pepper then placed on the grill.

Now you’re ready to combine all the ingredients and bring on the most flavorful potato salad you’ve ever had. Place your grilled potatoes, sliced boiled eggs, chopped bacon, Mama’s Lil Peppers, fresh dill and garlic ramps in a large mixing bowl. Drizzle over the dressing and gently toss to coat. You can use your discretion on how much dressing to put on, but I like to really coat the potatoes. Grilled potatoes tend to soak up the dressing pretty quickly. Add more fresh dill to the top before serving.

Fire up the grill and try these amazing main dishes that pair perfectly with Grilled Potato Salad. Flanken-Cut Short Ribs slathered in smoky raspberry chipotle sauce cook in minutes. Sweet & Spicy Salmon is a beautiful centerpiece for your backyard gathering and Chipotle Cherry Spare Ribs are a crowd favorite. 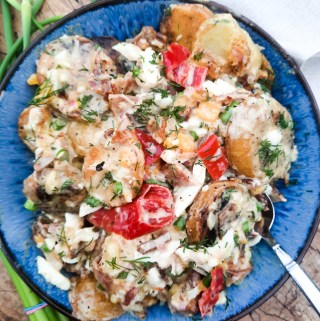 Where to Find Beecher’s Cheese

Beecher’s Handmade Cheese is local to Seattle at historic Pike Place Market and is the original site. New York’s Flatiron District hosts the second site, but you can find this handcrafted cheese at most local grocery stores.

The best thing about Beecher’s handmade cheese is that they focus on foods that are free of all the bad stuff, like hydrogenated oils (a.k.a. trans fat), artificial preservatives, colors, and sweeteners. They also use local dairy farmer’s to supply the milk for their craft cheese.

Beecher’s New Woman Cheese has a very unique flavor. Jamaican jerk spices add an earthy, nutty, spice that is like no other cheese. In a dish as simple and mild as a quiche, it adds just the right amount of flavor and a hint of smokiness.

This recipe calls for a 1 inch thick, 9 inch round tart pan.  Tart pans have a removable bottom, making it easier to cut and serve buttery, flaky crusted dishes. The only difference in a tart pan vs. a quiche pan is the depth.  Quiche pans are deeper, usually about 2 inches deep.  If using a quiche pan, you will want to double the quiche filling ingredients.  The crust ingredients should be just fine, as you have a little extra to work with.

Sometimes, a pie pan is used to make quiche.  No removable bottom here, resulting in a need for a thicker crust. If using a pie pan, due to the depth, you will want to double the quiche filling ingredients as well as make more crust.  The crust will need to be rolled out slightly thicker than if using a tart pan or quiche pan.

When adjusting the recipe and doubling the quiche filling, make sure to increase the cooking time.  You will know when the quiche is fully cooked when it no longer jiggles in the middle.  You don’t want to over cook your quiche, just to the point where it has just stopped jiggling. 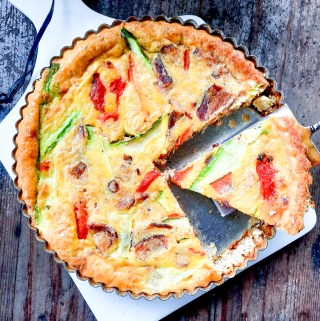 Calling all the dill pickle lovers – this one’s for you. I use my classic dill dip as a creamy dressing for this flavorful potato salad. The tender new potatoes really hold on to all that creamy dill flavor. This potato salad has been our family favorite Summer side dish. It all started when I was short on time and had to whip up a quick party dish.

I always have dill dip and fresh cut vegetables in my refrigerator for easy, healthy snacks. Something I learned from my mom. Remember Uncle Dan’s dill dip? I grew up on that. These days, we make our own homemade dill dip and that’s exactly what inspired this Spicy Dill Pickle Potato Salad with Bacon.

Being short on time led to using my dill dip as a dressing for potato salad. Deciding to take that dill flavor to the next level was the addition of Grillo’s Spicy Dill Pickles. They’re a permanent fixture in my refrigerator. Read more below and find the link to see where you can pick up these tasty pickles.

I like a crisp, fresh tasting dill pickle. When I found Grillo’s Pickles in the refrigerator section of my local grocery store, I knew I would be a fan. Their motto ‘ Crisp. Clean. Fresh. ‘ is exactly what you get. Grillo Pickles are cold pickled, which means they use simple ingredients like garlic, vinegar, dill, salt and grape leaves to bring you the freshest, crispiest pickles around. I use Grillo’s Hot Pickle Spears in my Spicy Dill Pickle Potato Salad with Bacon.

Perfect as a side dish, yet hearty enough for a vegetarian main dish.  Brussels Sprouts really hold up to this shallot lemon vinaigrette, making this a great dish for gatherings.  You’ll want to add the vinaigrette 15 minutes before serving to allow the brussels sprouts to completely absorb all the flavor, saving the pomegranate seeds, parmesan and seasoned breadcrumbs until just before serving. 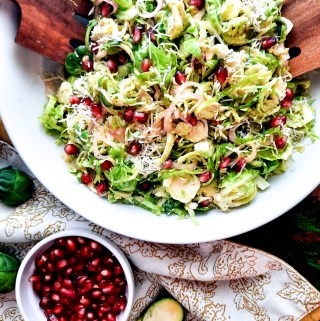 An easy side dish full of flavor, Roasted Spiced Carrots with Agave and Pepitas bring rustic elegance to your table in just 20 minutes.

Side dishes like these Roasted Spiced Carrots with Agave and Pepitas are always good to have on hand. Roasting carrots bring out the most flavor with the least amount of effort. Adding a hint of paprika and cumin accentuates the earthiness and the agave and pepitas finish off the flavor profile with a sweet crunch.

When creating a simple side dish like these Roasted Spiced Carrots with Agave and Pepitas, choose the best ingredients available to you. I like using organic rainbow carrots for an eye catching display. They really stand out and have a sweeter taste to them.

Preparing carrots with the green tops still attached is easy. Just cut off the majority of the greens, leaving about an inch for color. Using a vegetable peeler, peel away the outer layer of the carrot and extend up into the green. This will ensure that you have a nice, fresh looking carrot and remove any dirt that may have been left around the edges. 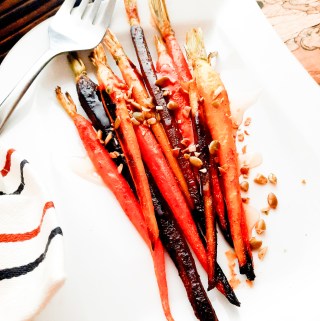 It's a Chowder kind of day. I like mine a little c

Wanna step up your pumpkin game? These Pumpkin Cr

🍁 Welcome Fall 🍁 I can feel the crisp in the

Yams and Sweet Potatoes. Are they the same? Most

It's all about the sauce. Double-Cut Pork Chops wi

Getting in the pumpkin groove with fall approachin

That fall chill is creeping in on us. Are you read

Sometimes it's OK to eat enchiladas on taco Tuesda

Finally got to visit @lambandcompany in Snohomish,

My garden keeps pumping out the zucchini. Use it u

If you're like me, you can't get enough summer cor

Save all those summer tomatoes 🍅 Roast, lift of

Working breakfast 🤠 Chilaquiles made with @hogs 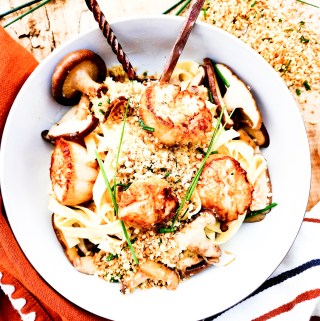 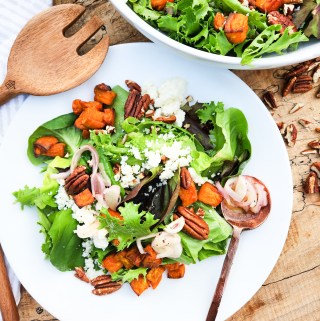 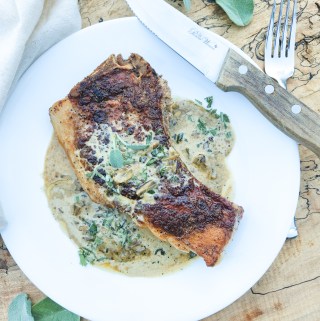