Make your own Christmas Wreath using fresh boughs of cedar, festive Christmas ribbon and a few other craft items like berries and pinecones.

Several years ago, I traded Black Friday for Wreath Making Friday and my world got a little greener. Leave the stress behind and gather around the outdoor table with your apple cider and a wheel barrow full of cedar boughs.

If you don’t have cedar trees near you, use another type of evergreen tree or visit your local tree farm and ask for some cuttings. There are different types of evergreen trees available depending where you live. Anything from Cedar, Fir, Pine, Mesquite or Juniper would look lovely.

How to Make a Christmas Wreath

Food to Keep You Warm:

A blend of red chiles, spices and orange juice produce a flavorful skin on this Out West inspired Chile Rubbed Smoked Turkey.

The best thing about smoked turkey is that it’s already cooked, which means you have more oven time for other dishes to cook. This 10 pound smoked turkey takes less than two hours to warm in the oven and comes out juicy enough to make gravy out of the drippings.

Chile Rubbed Smoked Turkey drippings have so much flavor from chiles and oranges and create a beautifully colored gravy. While the turkey is resting, melt two tablespoons butter in a sauce pan, then stir in two tablespoon’s flour and cook over medium heat until combined. Slowly add drippings from turkey until thickened. For an extra touch, add a pinch of cumin and smoked paprika and stir to combine. 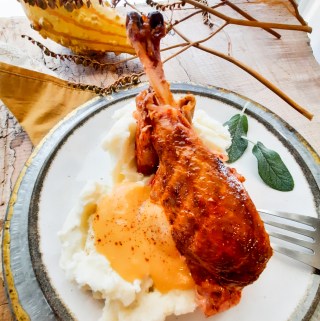